Here is an easy to read report on which programming languages are now “hot” in the market for software developers: Don’t Rely On Salary Data To Pick A Programming Language To Learn – ReadWrite.

The pace of change in software development is rapid – popular languages today may already be fading.  Pay scales for some niche languages are very high (such as Ruby)- but the market opportunity might not be large or lengthy.

END_OF_DOCUMENT_TOKEN_TO_BE_REPLACED

You can support this tutorial effort by purchasing a copy of the e-book from any of the following e-book vendors – thank you for your help!

Sorry for the “spam” – this is to update the earlier post with the news that the ebook is now available from Nook Press. It took longer than expected for that version of the book to go live.

Blockly is intended for use by software developers (rather than children learning to code) to generate Javascript:

Actually, it can output Javascript, Python and Dart programs too 🙂

My App Inventor 2: Tutorial e-book – the fast and easy way to create Android apps – is now available from Amazon, Google Play Books, Apple Books via iTunes, and Kobo! And its very inexpensive – less than USD $3.00! Less than a latte!

Read it anyway you want!

Read on the e-book on the Kindle or Amazon Fire, read on Kindle for Android free apps,  read on your PC or Mac, reading using the Google Play Books app on your phone or tablet, read on iPads or Mac OS X, or the Kobo reader software (all platforms!)

Depending on the vendor, you may download a free sample!

Usage is climbing sharply! MIT suggests the usage trend indicates high usage in schools – with a drop in the summer and a very rapid expansion once school resumed in September. 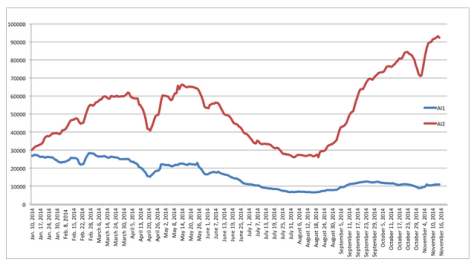 Will also include an update to the AI Companion support app on Android devices.

Students will be using App Inventor:

Lenovo and the National Academy Foundation (NAF) today announced 10 NAF Academies have been selected to participate in the Lenovo Scholar Network, a program designed to enable the next generation of developers and entrepreneurs through a rich application development curriculum and creation of apps. As part of the program, students will participate in a project-based competition that tasks them with designing and developing a mobile app and a business plan for taking the app to market.

Malicious attackers find App Inventor so easy to use they can create their own nasty Android apps quickly:

App Inventor doesn’t give malicious apps any special powers nor access to exotic exploits to attack your phone. But it does make the production of Trojanized apps enormously easy. With only a basic understanding of Android programming, an attacker can churn out tons of malicious apps.