Smart phones and tablets contain several kinds of “sensors” to sense information about their environment. For example, an accelerometer provides information about movement of the phone (or tablet) – letting us know the speed and direction of travel in x, y and z coordinates (three dimensions).

After going through this tutorial, you now know enough to create your own interactive smart phone game!

Before we get started, please review these earlier tutorials:

What the Sample Program Does

The sample program, in this tutorial, adds the orientation sensor to the earlier sprite-based animation. By tilting the phone, we control the image sprite (or if you prefer, a ball object) on the screen. The sprite moves in the direction of the phone’s tilt angle – the steeper the tilt, the faster the sprite moves in the tilt direction.

Here’s a video clip to illustrate how this works:

This program also adds a button “Orient” and introduces a simple way to see what’s going on inside an app.

Tip: Turn off Auto-Rotate on your phone

When rotating your phone around in odd directions, Android may think you are switching from “portrait” viewing mode to “landscape” viewing mode. Which is probably not want you want the phone to do when using this demo program. You can turn off the automatic screen rotation by going to:

and remove the check mark next to this item.

Additionally, the “txtCurrentHeading” text box displays the values returned by the orientation sensor so we can see what the program is doing on the “inside”.

Introduction to the Orientation Sensor

The orientation sensor appears in the “Sensors” section of the Palette – drag the OrientationSensor component to the Viewer and drop on your app.

The sensor is added as a non-visible component, at the bottom: 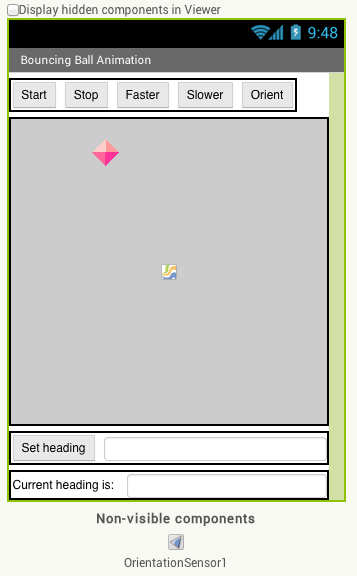 The orientation sensor provides the angle of tilt of the phone in an x and y axis – known as roll and pitch.

Think of an airplane in flight. When the plane turns to the left, the left wing drops down and the right wing raises up – that’s called “roll”.

Hold your phone in front of you in “portrait” mode so that the short sides are at top and bottom and the long sides at left and right. Hold the phone so that it’s basically flat (backside down).

(You don’t need to know the next two paragraphs to use this example – but it may be helpful to understand some of the orientation sensor features.)

If you tilt the phone so that the top of the phone is pointed down, then the pitch might have a value -45 or even -90 degrees if you point the top all the way down. If you pitch the top up, then the pitch goes in positive degrees between 0 and 90 degrees.

The amount of roll in the x and y axes (roll and pitch) can be used to calculate the angle of trajectory for the the sprite, on the screen, and the speed of movement. That is, the steeper we tilt the phone, the faster the sprite should move on the screen. (Please see “Afterword” at the bottom of this post.)

In the Blocks editor, we can look at the code. When the phone is moved, the orientation sensor throws an event “OrientationChanged“. Our blocks code handles this with a “when OrientationSensor1.OrientationChanged” event handler. In the sample code below, the last two lines are the two lines that change the direction and speed of the sprite based on the phone’s angle – the rest of the blocks code is to display the orientation sensor values in txtCurrentHeading.

The orientation sensor has a property value called “Angle“, which conveniently is the angle determined by the phone’s tilt, and in a form that we can assign to the sprite’s Heading property.

Similarly, the sensor returns a “magnitude” value that we can use to set the sprite’s movement speed. The Magnitude has a value between 0 and 1, while the Speed is set to positive integer values, like 10 or 20 or 30, and so on. To convert the fractional magnitude to a useful speed, we multiply by a constant value – in this example 50. Why 50? I experimented with the program and found that 50 produced a nice speed that felt right – but you can certainly change this value to something else and see what happens!

How the Orient Button Works

The following blocks code inverts the current orientation setting from true to false or false to true.

But some days I can be dense. I actually scribbled out circles and triangles and started down a path of calculating the arc tangent for the heading and the slant distance for the speed. As the code became complex I said to myself, “You know, App Inventor is supposed to be easy – this approach isn’t easy. May be I’d better look at the documentation again!“.

Followed by a whopping big DUH: The Angle and Magnitude properties do all these calculations behind the scenes, making it easy to use the orientation sensor for controlling sprites. I didn’t need to do all those calculations myself!

3 thoughts on “Sensors: How to use the Orientation Sensor”